YOU NEED CARE TOO!

We have been talking about taking care of others.  But Dominoes need to be put in place so those you want to take care of you have the legal authority they need to do that.  Circumstances can happen  if the Dominoes fall on you in a way that you need that help. 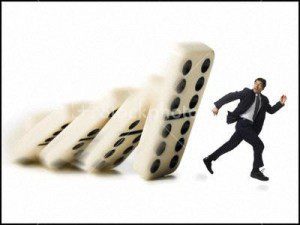 While you may be very efficient to make sure you have the proper “title” to everything you own; if you cannot deal with the property for some reason, that is a real problem.  It is not unusual for folks to be unexpectedly hurt in a car accident; have a heart attack; or a stroke.  Any condition that makes us unconscious creates this problem.

Assume, for discussions sake (No one likes to think about these possibilities; but we have to) one of these situations happens.  You are unconscious and it is time to roll over a Certificate of Deposit to get a new higher rate.  But, you cannot get to the bank to do it and it is titled only in your name (even if it is I/T/F for someone if we lose you).  Who will be able to do the rollover?  The bank will only deal with you.  There is no one else with authority.  So, the Certificate of Deposit stays at the same lower rate.

Think about your stocks and bonds and mutual funds.  You are in this condition and there is a “Sell” recommendation.  Only you can order the sale.  If the stock is not sold, you lose money on the expected drop in value.  Or there is a “Buy” on something you cannot take advantage of; so that is a real opportunity cost.

The frustrating thing for lawyers is that these problems can be avoided by one pretty simple document; a Durable Power of Attorney. A Durable Power of Attorney lets you choose someone you prefer to manage your accounts if you cannot.  Why a “Durable” Power of Attorney.  Well, powers of attorney have been around for hundreds of years.  They name someone as a mere “agent”.  That means they can show up for you; but, if there are any questions, you can be called to give directions.  If you are unconscious and are not able to give the direction; then the “agency” fails.  It is not “durable”.  So, in modern times, legislatures came up with the “Durable Power of Attorney”; which means the agency still works even if you were, in fact, unconscious.  Of course, the agent is only allowed to do things in your best interest.  (Some do not, so be careful who you name.)  This is a very valuable and critical Domino everyone should have in place. 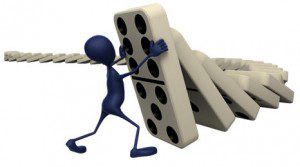 What About Instructions to the Doctors? – Financial matters are not the only thing that needs attention when this kind of emergency happens.

If you are unconscious, giving doctors informed consent to medical procedures cannot happen.  Here we mean those medical procedures to keep you alive and are designed to get you well.  You need to make a Health Care Surrogate Designation.  That names (“designates”) the person with the legal authority to give consent when needed.  This is critical if you do not have a spouse the doctors will listen to.

The Living Will only deals with “letting you go” if there is no way you will or could recover from a terminal condition.  If that is what you would want, but cannot give the doctors those instructions, you want someone you trust named who can.  Most of us will remember the tragedy of Terry Schaivo; and the national crisis created because she did not have a written Living Will.  He husband testified being let go in her condition was what she wanted and she told him that.  But everyone from her parents to the Majority Leader of the U.S. Senate (a doctor diagnosing without ever having visited her as a patient) said he was lying.  In the end, the Courts allowed her to pass and an autopsy proved she would never have recovered from her condition.  If she only signed that one document; the Living Will, her last days would have been spent in dignity with the care she wanted.

What happens if these Dominoes are Not Set Up? –  The law provides a stop gap set if Dominoes fall into disarray because we have NOT set them up like we want. 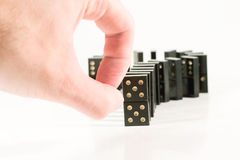 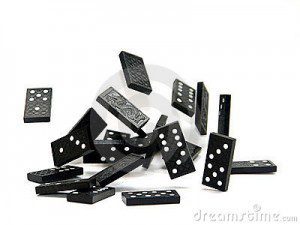 This is Guardianship.  If the conditions described above happen and you have not “reset” the Dominoes in the ways suggested, the following happens.  Someone has to file a Petition for Guardianship and to Appoint a Guardian in a proper Court.  The Judge sends someone (often a committee) to examine you to see if you are in a condition where he should declare you “Incapacitated” under the law.  That means your rights to take care of yourself are taken away from you.  At the same time people can be asking for an appointment as your Legal Guardian.  That person takes over your life and financial rights subject to the control of the Judge.

Guardianship proceedings are an avoidable horror that makes a bad situation worse; and can usually be avoided.  They are costly.  What the Court can authorize has nothing to do with modern society.  It is demeaning.  Worst of all; family disputes about if you should be declared “Incapacitated” and who should be your Guardian are among the most terrible that can occur.  And it all happens while you are in another room with no way to say what you want for yourself.

The law creates the Guardianship alternative to protect the person who is the subject of the proceeding.  That is a good thing.  But most of us do not really need that protection; if we set up the Dominoes of our life and property to avoid it.

Single People; especially Young Ones Need to Set Up the Dominoes Correctly.  With so much divorce, women outliving their husbands for many years, and young people attaining some means or waiting longer to marry; making proper arrangements for if we cannot take care of ourselves is critical in our society.

I recently asked a young, single, man what would happen if he became unconscious and the doctors needed instructions or his consent.  “I guess my biological parents would be the ones who can tell them what do to?”, he answered.   Well, he is right.  Under the law his parents would have that right.  However, before that can happen, they have to file a Petition for Guardianship and to Appoint a Guardian to get clear legal authority from a Judge to do what everyone would expect they can do.

This is a situation where common sense does not prevail.  Every one of us needs to have these simple documents completed so our care happens more easily.  We can avoid the costs, administrative limitations and headaches, and indignities of a Guardianship proceeding with a few simple documents.

NEXT TIME: WHAT ABOUT MY OWN KIDS?